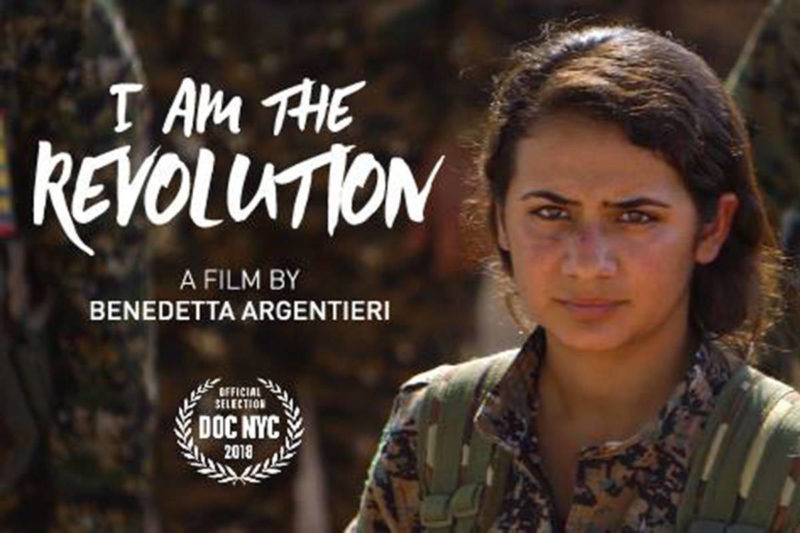 Women’s Movements in the Middle East:

I am the Revolution is an inspiring documentary about three women fighting for freedom and gender equality – Selay Ghaffar, Rojda Felat, and Yanar Mohammed- agents of the groundswell of feminist revolutions in Afghanistan, Syria, and Iraq. Taking a journalistic approach, the film challenges the discourses of silent and timid women in the Middle East and instead shows the strength of women rising up on the front lines, in remote villages, and in city streets, to claim their voice and their rights.

The Emergency Committee for Rojava and The Center for Place, Culture and Politics invite you to celebrate the women’s movements in the Middle East with Benedetta Argentieri, the director of the documentary film, I am the Revolution, and Dr. Choman Hardi, a scholar and poet from Iraqi Kurdistan. The event includes screening of I am the Revolution followed by a panel and discussion.

Bendetta Argentieri is an independent journalist and director. Since 2014 she has been focusing on Iraq and Syria with several trips on the ground and she will be speaking to us online from the region. She writes for both Italian and American publications while directing full-length documentaries. She graduated from Columbia University where she obtained an MA in Journalism and Politics.

Dr. Choman Hardi is a Kurdish feminist and scholar, poet, and translator. Born in Iraq, she received political asylum in the UK in 1993, and was educated there, returning to Iraq to become a professor of English at the American University in Sulimania, and founder of its gender studies program. Her book, ‘Gendered Experiences of Genocide: Anfal Survivors in Kurdistan-Iraq’ (Routlege, 2011), is based on oral histories she did of the Anfal, the genocidal gas attack on Iraqi Kurds under Saddam Hussein. Her poems are part of the UK high school curriculum and one of them was featured on the London subway system.

Co-sponsored by The Center for Place, Culture and Politics and The Emergency Committee for Rojava.