Bio: Shippen received a Ph.D. in Political Science from Rutgers University, New Brunswick. She is currently Program Coordinator and Associate Professor of Political Science at LaGuardia Community College at CUNY and has taught a course on the Politics of Death and Dying for the Political Science Department at the CUNY Graduate Center. She is the author of Decolonizing Time: Work, Leisure, and Freedom (2014), for Palgrave Macmillan’s Critical Political Theory and Radical Practice Book Series. Her book reconsiders discretionary time as a measure of freedom through the concept of temporal autonomy as developed through the Aristotelian-Marxist and critical theory traditions. Her research is further enriched by the respective contributions of feminist, post-colonial, and critical race theory.

Her current research focuses on border violence through the lens of settler colonialism and Critical Indigenous Theory. During the CPCP fellowship, she is completing an article, “The Politics of Spectral Death: Settler Colonialism and Anti-Indian Violence in a United States Reservation Border Town,” as part of a larger book project titled, A Refusal of Solidarity: Tribal Sovereignty and the American Liberal Democratic Settler-State, which considers the refusal of solidarity as a form of political resistance against the temporal and spatial boundaries defined by the liberal democratic settler-state.

Bio: Maggie Dickinson is assistant professor of interdisciplinary studies at Guttman Community College, CUNY. Her book “Feeding the Crisis: Care and Abandonment in America’s Growing Food Safety Net” is forthcoming from the University of California Press in Fall 2019. As a cultural anthropologist, her research focuses broadly on food and welfare policy, inequality, and the politics of redistribution.​

The DeGrasse Family of the City of New York

Bio: Prithi Kanakamedala is an Assistant Professor of History at Bronx Community College. Her research interests include nineteenth-century free Black communities in Brooklyn and New York, race and citizenship in the early republic, and the material culture of New York City. As a public historian she has worked for Place Matters, Brooklyn Historical Society, Weeksville Heritage Center, and Danspace Project. She curated the semi-permanent history exhibit Brooklyn Abolitionists which is still on view at the Brooklyn Historical Society. Her current work looks at racial solidarity in early nineteenth century New York. Prithi holds a Ph.D. from the University of Sussex and is originally from Liverpool, England. 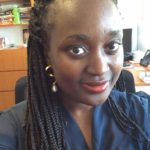 Bio: Judith Anderson is an Associate Professor in the Center for Ethnic Studies at Borough of Manhattan Community College.  She received her Ph.D. in Anthropology from the University of Florida in 2010.  As an Afro-Latin Americanist, her research focuses on politically mobilizing Africans and Afro-descendants in Buenos Aires. She examines the resurgence of Black identity in Argentina, the “European nation of Latin America,” as well as the most recent endeavors of local Black activists.  The Pan-African efforts of organizers concentrated in the City of Buenos Aires have led to several initiatives with large and small-scale gains including the historic re-inclusion of Afro-descendants on the 2010 national census after more than a century of absence.  Dr. Anderson has several publications based on her work and she also leads study abroad programs to both Argentina and Brazil.

Bio: Sónia is a historian, social-political activist, and organizer with interdisciplinary experience with youth and elderly people in several European countries. She has BA in Modern and Contemporary History – Politics and International Affairs from ISCTE-IUL Lisboa, and a Master’s Degree in African History from Universidade de Letras de Lisboa. She received her PhD Philosophy from Humboldt University Berlin. Her dissertation, titled Militant Education. Liberation struggle. Conscientization, and underground educational structures in Guinea Bissau 1963-1978, focuses on the liberation schools and the international school network created by the liberation movement during the guerrilla war for independence in Guinea Bissau. She is currently working on her book manuscript with the same title. Sónia is also working on a new project on oral history, under the provisory title Remembering the struggle(s). Life and (hi)stories of PAIGC militants. She is also the editor of the booklets Cadernos Consciência e Resistência Negra and author of the book Na Pó di Spéra. Percursos nos Bairros da Estrada Militar, Santa Filomena e Encosta Nascente. Sónia is currently working on her first short film with filmmaker Felipa César.

Bio: Samuel Stein is a geography PhD student at the CUNY Graduate Center and an Urban Studies instructor at Hunter College with a background in tenant organizing, labor research and policy advocacy. His work focuses on urban political economy, with an emphasis on housing, real estate and gentrification in New York City. His dissertation uncovers the complex structural linkages between unions and non-profits, the real estate industry, and the New York City planning apparatus, in order to reveal why many working class institutions have supported planning programs that accelerate gentrification. In February, 2019, Verso will publish his first book, Capital City: Gentrification and the Real Estate State, which analyzes how the growing concentration of capital in real estate has altered the profession of planning.

Bio: Zeynep Oguz is a doctoral candidate in Cultural Anthropology at the Graduate Center. She received her MA in Sociocultural Anthropology from Columbia University and BA in Sociology from Bogazici University. Building on environmental anthropology, science and technology studies (STS), and critical studies on time and temporality, her doctoral research addresses the world-making effects of geological knowledge and natural resources. Funded by the National Science Foundation and Wenner-Gren Foundation, her doctoral project examines the state-led oil exploration and extraction activities in Turkey, analyzing how oil exploration endeavors have rearranged the relations between time, environments, people, and the Turkish state in uneven, violent or unanticipated and creative ways, as well as the kinds of political futures they have enabled and foreclosed.

Bio: Jonathan Kwan is a philosophy Ph.D. candidate at The Graduate Center, CUNY. His research primarily lies in social and political philosophy and intersects with environmental and indigenous philosophy. Jonathan’s dissertation, entitled “The Social Ontology of the People,” develops an eco-political account of the people in order to inform the issues of indigenous territorial rights, structural racist domination, and immigration controls. In his efforts to contribute to cross-cultural and comparative approaches to philosophy, Jonathan also has interests in Chinese and Buddhist philosophy. Jonathan has taught widely at various campuses across CUNY including Hunter College, Brooklyn College, Baruch College, and LaGuardia Community College. In addition to serving as a fellow at the Center for Place, Culture, and Politics, Jonathan is also a Mellon Humanities Alliance Teaching Fellow, a Communication Fellow at the Schwartz Communication Institute, and a fellow at the Center for Global Ethics and Politics. He also serves as the Associate Managing Editor for the Journal of Social Philosophy.

Latin American, Iberian, and Latino Cultures
Email: rpineda@gradcenter.cuny.edu
The Many Deaths of Hugo Chávez: Illness, the Body and Post-Hegemony in Contemporary Venezuelan Art and Literature (2013-2015)

Bio: Rebeca Pineda Burgos is a Candidate in the PhD program in Latin American, Iberian, and Latino Cultures at The Graduate Center, CUNY, New York. Her research focuses on contemporary Venezuelan cultural objects as novels, film and visual arts and their interpretation of chavismo and sociopolitical Venezuelan reality.

Chinua Achebe’s Things Fall Apart: Literary Humanism and the Problem of Human Dignity, and Bandung, Frantz Fanon, and Edward Said: Postcoloniality and the Question of Humanism

Bio: Deepa Jani is Assistant Professor of English at SUNY Old Westbury in Long Island.  She specializes in Global Postcolonial and Postmodern literatures, Anglophone African and World Literatures, and Critical Theory.  Her research also focuses on gender and critical race studies, humanism and human rights discourse, and globalization studies.  Her articles on Coetzee and critical theory have appeared in two edited collections, one of which is on postcolonial studies and the other on critical studies.  Additionally, her second article on Coetzee was published in the Oxford Journal, Forum for Modern Language Studies.  Her interview on Coetzee appeared in the film and App, Traverses: J. M. Coetzee in the World.  She has also served as peer reviewer in the fields of Postcolonial and World Literatures and Critical Theory.  She is currently completing her first book manuscript titled “J. M. Coetzee: Ethics, Subalternity, and the Critique of Humanism.”  In preparation for her second book project on the legacy of humanisms from the Global South, she is also working on the article “Bandung, Frantz Fanon, and Edward Said: Postcoloniality and the Question of Humanism.”