Back to the 30s: Recurring Crises of Capitalism, Liberalism and Democracy
– CUNY alumni discuss their contributions to the book –
May 18th at 11am ET via Zoom
Register for the event. Find the book here. 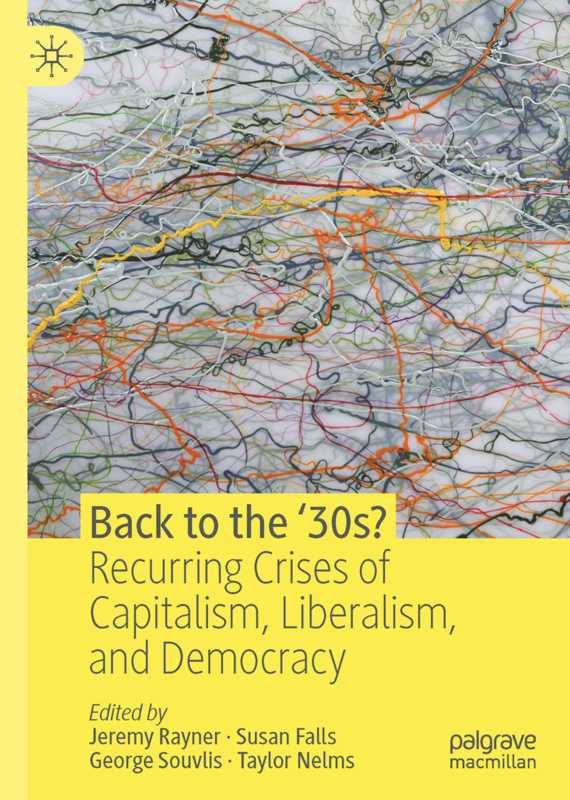 The essays in this volume address the question: what does it mean to understand the contemporary moment in light of the 1930s?  In the aftermath of the worst economic crisis since the Great Depression, and facing a dramatic rise of right wing, authoritarian politics across the globe, the events of the 1930s have acquired a renewed relevance. Contributions from a diverse, interdisciplinary group of scholars address the relationship between these historical moments in various geographical contexts, from Asia-Pacific to Europe to the Americas, while probing an array of thematic questions—the meaning of populism and fascism, the contradictions of constitutional liberalism and “militant democracy,” long cycles and crisis tendencies in capitalism, the gendering and racialization of right wing movements, and the cultural and class politics of emancipatory struggles. Uncovering continuity as well as change and repetition in the midst of transition, Back to the 30s? enriches our ability to use the past to evaluate the challenges, dangers, and promises of the present.

Susan Falls is Professor of Anthropology in the Department of Liberal Arts at the Savannah College of Art and Design, USA, and is the author of various articles on the material culture and political economy of objects from diamonds to housepaint, as well as Clarity, Cut and Culture: The Many Meanings of Diamonds (NYU, 2014), White Gold: Stories of Breast Milk Sharing (University of Nebraska, 2017), and Overshot: The Political Aesthetic of Woven Textiles from the Antebellum South and Beyond (with J. Smith, University of Georgia, 2020)

Saygun Gökarıksel is an Assistant Professor of Anthropology at Bogazici University’s Department of Sociology, Istanbul. His research concerns the themes of law, historical capitalism, communism, nationalist populism, and revolutionary politics. His current work explores the problems of nationalist appropriation of transitional justice and postcolonial discourse in neoliberal Eastern Europe in reckoning with the communist past. His writings and commentaries have appeared in journals and forums across Eastern Europe, the Middle East, and the USA. His recent publications include “Facing History: Sovereignty and the Spectacles of Justice and Violence in Poland’s Capitalist Democracy” (Comparative Studies in Society and History, January 2019), (with Umut Türem), “The Banality of Exception? Law and Politics in ‘Post-Coup’ Turkey” (South Atlantic Quarterly, January 2019). He is currently working on a book tentatively entitled Through a Glass Darkly: Transitional Justice and Remaking the Public in Poland After State Communism.

Kristin Lawler is Associate Professor of Sociology at College of Mount Saint Vincent in New York City. Her research interests include the labor movement, popular culture and counterculture, and, more recently, the relationship between national liberation struggles and syndicalist labor movement strategies. Her first book, The American Surfer: Radical Culture and Capitalism, was published by Routledge in 2011. Her essays appear in numerous edited collections, including Class: The Anthology, The Surf Studies Reader, Southern California Bohemias, and Living with Class: Philosophical Reflections on Identity and Material Culture. She is a member of the editorial collective of the journal Situations: Project of the Radical Imagination. Her work has also been published in Z Magazine, Ikaria Magazine (Greece), Italian American Review, and Urban Affairs Review. Her newest essay, “Labor’s Will to Power: Nietzsche, American Syndicalism, and the Politics of Liberation” will appear in Nietzsche and Critical Theory (Brill, forthcoming). She is currently working on a new book, Shanty Irish: Slackers, Sabotage, and American Syndicalism.

Jeremy Rayner (Ph.D. CUNY 2014) researches processes of state formation, practices of democracy, and struggles over public and common property in relation to changing regimes of accumulation. His recent publications include “The Counter-Movement Through the Lens of Generation: Emancipation, Protection, and Neoliberalization in Costa Rica, 2000–2018” (with Valeria Morales) in the Journal of Latin American and Caribbean Anthropology and “Autonomy, Centrality and Persistence in Place: The Right to the City and the Indigenous Movement in Quito” in City and Society, as part of a dedicated section on the Right to the City in Latin America which he edited with Claudia Zamorano. He is also co-editor of Las Comunas del Ecuador: Autonomía, Territorio y el la Construcción del Estado Plurinacional (IAEN, 2019), Value in Crisis: Machines, Labor, and Life, in and beyond Capitalism (under review), and a forthcoming special issue of Open Anthropological Research on the politics of the COVID-19 pandemic. He has taught anthropology at Hunter College and served on the faculty of the Center for Public Economics at the National Institute for Advanced Study (IAEN) in Quito, Ecuador, where he was also researcher and sub-director at the National Center for Strategy on the Right to Territory (CENEDET).

George Souvlis is a Postdoctoral researcher at the University of Crete, Department of Sociology, and a Teaching Fellow at the University of Ioannina, Department of History and Archaeology. He holds a Ph.D. in history from the European University Institute in Florence where he worked on the Greek Metaxas regime, its organic intellectuals, and the role of women within the “New State.” He writes for various progressive magazines including Salvage, Jacobin, ROAR, and LeftEast. He recently published the book, Voices on the Left: Challenging Capitalist Hegemony (Red Marks, 2019).

Mary N. Taylor is an anthropologist, urbanist, and artist, and currently the Assistant Director of the Center for Place, Culture, and Politics at the Graduate Center of the City University of New York. Her research focuses on sites, techniques, and politics of civic cultivation, social movements, and governance; the ethics and aesthetics of nationalism and cultural differentiation; and people’s movements in interwar, socialist and post-socialist Hungary. Her work has appeared in numerous journals and magazines, and she co-edited Co-revolutionary Praxis: Accompaniment as a Strategy for Working Together (Aukland: St. Paul St. Gallery, 2015). Her book Movement of the People: Populism, Folk Dance and Citizenship in Hungary will be published in 2021 (Indiana University Press). She has taught at Hunter College, the Cooper Union for the Advancement of Science and Art, and the Parsons School of Design. She is on the editorial collective of LeftEast.

Don Robotham is a graduate of the University of the West Indies and obtained his Ph.D. from the University of Chicago in 1987. A critic of the concepts of postcolonialism and postmodernism, he has worked extensively in the English-speaking Caribbean as well as among the gold miners of Ghana in West Africa, focusing on issues of development and concomitant difficulties caused by advanced capitalist globalization. Since September 2008, he has served as executive officer of the Office of Educational Opportunity and Diversity Programs (OEODP), a project that provides services to all graduate students enrolled at CUNY, but particularly those from underrepresented groups.

This event is sponsored by the Center for Place, Culture and Politics and cosponsored by the Department of Anthropology at the Graduate Center, CUNY. It is free and open to the public.