April 22nd @ 4:30-6:30 pm EST via Zoom
Register in advance for this meeting:
https://gc-cuny-edu.zoom.us/meeting/register/tZYucu2tqDgpHNH0viNjRtlvWcLvXhIqVXWu [gc-cuny-edu.zoom.us], and join the event on facebook. 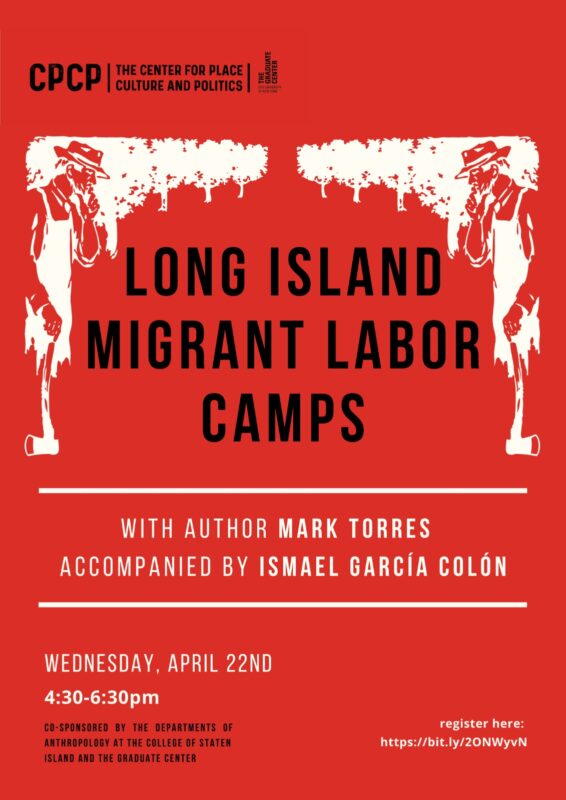 During World War II, a group of potato farmers opened the first migrant labor camp in Suffolk County to house farmworkers from Jamaica. Over the next twenty years, more than one hundred camps of various sizes would be built throughout the region. Thousands of migrant workers lured by promises of good wages and decent housing flocked to Eastern Long Island, where they were often cheated out of pay and housed in deadly slum-like conditions. Preyed on by corrupt camp operators and entrapped in a feudal system that left them mired in debt, laborers struggled and, in some cases, perished in the shadow of New York’s affluence. Author Mark A. Torres reveals the dreadful history of Long Island’s migrant labor camps from their inception to their peak in 1960 and their steady decline in the following decades.

Mark A. Torres is a husband, father, attorney, and author. Mark is the author of two fictional crime novels entitled “A Stirring in the North Fork” (2015) and “Adeline” (2019), both available on Amazon, and a labor union related children’s book entitled “Good Guy Jake” (Hard Ball Press, 2017). Mark is also a labor and employment attorney who tirelessly represents thousands of unionized workers and their families throughout the greater New York area. Mark has a law degree from Fordham University School of Law and a bachelor’s degree in history from New York University. Mark achieved his academic milestones while working full time as a Refrigeration Engineer at New York University and attending class in the evenings, all while raising a family. Mark’s commitment to the Labor movement spans nearly 30 years.

Ismael García Colón is Professor of Anthropology at the College of Staten Island and CUNY Graduate Center. He is a historical and political anthropologist with interests in political economy, oral history, migration, Gramsci’s concept of hegemony, farm labor, race and citizenship, U.S. empire, and U.S ethnic and racial histories. His research experiences include documenting Latinxs in the NYC labor movement, and conducting ethnographic research on landless workers, migrant farmworkers, colonial state formation, and land distribution programs in Puerto Rico. García Colón is the author of Colonial Migrants at the Heart of Empire: Puerto Rican Workers on US Farms (University of California Press, 2020) and Land Reform in Puerto Rico: Modernizing the Colonial State (University Press of Florida, 2009). His publications have also appeared in Latin American Perspectives, CENTRO Journal, American Ethnologist, Latino Studies, and Dialectical Anthropology. García Colón’s current research explores the Puerto Rican experience in U.S. farm labor and its relation to U.S. colonialism and immigration policies, and how government policies and workers formed and transformed modern subjectivities in Puerto Rico.