From “Upscaling” to Uhauling: Perspectives on Black/Queer Gentrification in Conversation

How do the politics of gentrification play out across race, class, gender, and sexuality? What do these politics look like, and how must we intervene in them to produce a Black and queer city? Join Brandi Summers (UC Berekeley), author of Black in Place: The Spatial Aesthetics of Race in a Post-Chocolate City, and Jen Jack Gieseking (U of Kentucky), author of A Queer New York: Geographies of Lesbians, Dykes, and Queers, as they are joined in conversation with Desiree Fields (UC Berekeley) to discuss the similarities, differences, and incommensurabilities between their “Queer New York” and the “Post-Chocolate City,” their participants, and the processes of gentrification in the late 20th and early 21st century US cities.

Over the past few decades, rapid gentrification in New York City has led to the disappearance of many lesbian and queer spaces, displacing some of the most marginalized members of the LGBTQ+ community. In A Queer New York, Jen Jack Gieseking maps both the political, economic, and geographic dispossession and survivance of lesbian and queer communities. A Queer New York is an eye-opening account of how lesbians and queers have succeeded in carving out spaces—and lives—in a city that has consistently pushed its most vulnerable citizens away, and, in so doing, contributed to twenty-first century gentrification and urban development. 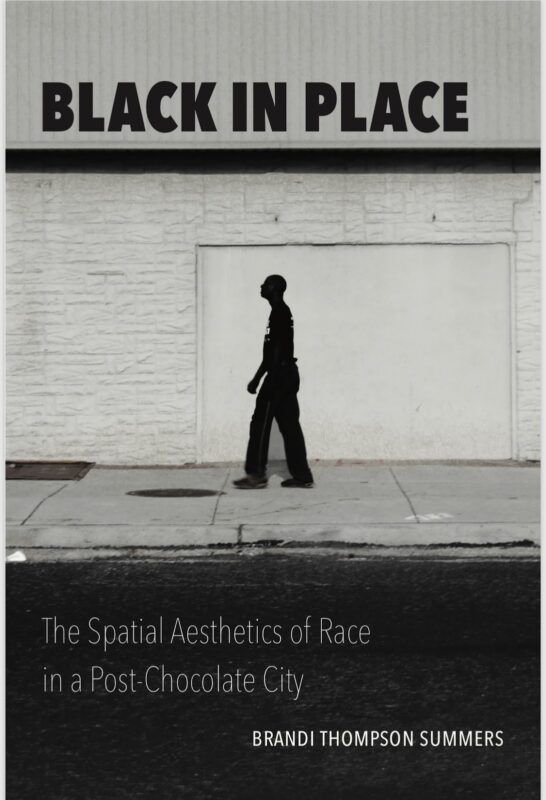 Black in Place: The Spatial Aesthetics of Race in a Post-Chocolate City by Brandi Summers

While Washington, D.C., is still often referred to as “Chocolate City,” it has undergone significant demographic, political, and economic change in the last decade. In D.C., no place represents this shift better than the H Street corridor. Brandi Thompson Summers documents D.C.’s shift to a “post-chocolate” cosmopolitan metropolis and offers a theoretical framework for understanding how blackness is aestheticized and deployed to organize landscapes and raise capital. In Black in Place, Summers analyzes how blackness—as a representation of diversity—is marketed to sell a progressive, “cool,” and authentic experience of being in and moving through an urban center.

Jen Jack Gieseking (CUNY GC ‘13) is an urban and digital cultural geographer and environmental psychologist. They are assistant professor of Geography at the University of Kentucky. His first monograph, A Queer New York: Geographies of Lesbians, Dykes, and Queers, 1983-2008 (NYU Press, 2020), is a historical geography of contemporary lesbian-queer society and economies in New York City. As part of his commitment to public queer history, Jack created a companion website including interactive maps of over 3,000 lesbian and queer places and organizations that they gathered from archival sources: jgieseking.org/AQNY. They co-edited The People, Place, and Space Reader (Routledge, 2014) with William Mangold, Cindi Katz, Setha Low, and Susan Saegert. Jack is presently conducting research on trans people’s use of Tumblr as a site of cultural production, and trans medical and health knowledge. Their next book, Queering Settler Cosmopolitanism: Dyke Bars, Activist Zaps, and Lesbian Styles in the Making of New York City, will address the ways mainstream media, politicians, and corporations portray white, middle-class lesbians, queers, and trans people as cosmopolitan citizens, which in turn maintains the racist, settler, and capitalist city. They are Managing Editor of ACME: International Journal of Critical Geography, the only fully open access journal in geography. He can be found on Twitter at @jgieseking or via his website jgieseking.org.

Brandi T. Summers is assistant professor of Geography and Global Metropolitan Studies at the University of California, Berkeley. Her research examines the relationship between and function of race, space, urban infrastructure, and architecture. Her book, Black in Place: The Spatial Aesthetics of Race in a Post-Chocolate City (UNC Press, 2019), explores how aesthetics and race converge to map blackness in Washington, D.C. and demonstrates the way that competing notions of blackness structure economic relations and develop land in the gentrifying city. Her current research explores the complex ways that uses of space and placemaking practices inform productions of knowledge and power in Oakland, California. Dr. Summers has published several articles and essays that analyze the relationship between race, power, aesthetics, and urbanization that appear in both scholarly and popular publications, including New York Times, The Boston, Globe, International Journal of Urban and Regional Research (IJURR), Public Books, and The Funambulist. Dr. Summers is a member of the Editorial Collectives at City and ACME, and is on the editorial boards of Urban Geography, AAG Review of Books, and City & Community.

Desiree Fields is assistant professor of Geography and Global Metropolitan Studies at the University of California, Berkeley. She received her Ph.D. in Environmental Psychology from the Graduate Center of the City University of New York. Fields studies the intersection of housing, finance, and technology in cities. Her work considers the treatment of rental housing as a financial asset and the role of digital technologies in facilitating financialization. She is especially interested in the political terrain of this process, and how urban struggles for justice seek to contest it. Her current work theorizes the racialized geographies of housing financialization and the politics of reclamation emerging in response. Fields has published widely on the relationships among housing financialization, movements for justice, and digital platforms in journals like Economic Geography; Housing, Theory, and Society; International Journal of Urban and Regional Research, and Urban Studies. Dr. Fields is a board member of the Urban Studies Foundation and an editorial board member of Environment and Planning A: Economy and Space and AAG Review of Books. You can find her on Twitter at @fieldsdesiree.