Authors of the Forthcoming Book

The Making of Global Capitalism

in a discussion of their book with

UPDATE: View the video of the event here 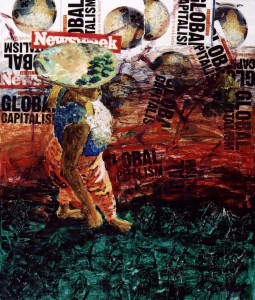 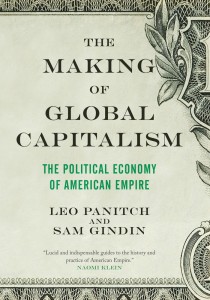 The all-encompassing embrace of world capitalism at the beginning of the twenty-first century was generally attributed to the superiority of competitive markets. Globalization had appeared to be the natural outcome of this unstoppable process. But today, with global markets roiling and increasingly reliant on state intervention to stay afloat, it has become clear that markets and states aren’t straightforwardly opposing forces.

In this groundbreaking work, Leo Panitch and Sam Gindin demonstrate the intimate relationship between modern capitalism and the American state, including its role as an “informal empire” promoting free trade and capital movements. Through a powerful historical survey, they show how the US has superintended the restructuring of other states in favor of competitive markets and coordinated the management of increasingly frequent financial crises.

The Making of Global Capitalism, through its highly original analysis of the first great economic crisis of the twenty-first century, identifies the centrality of the social conflicts that occur within states rather than between them. These emerging fault lines hold out the possibility of new political movements transforming nation states and transcending global markets.

Sam Gindin is the former Research Director of the Canadian Autoworkers Union and Packer Visiting Chair in Social Justice at York University. Among his many publications, he is the author (with Greg Albo and Leo Panitch) of In and Out of Crisis: The Global Financial Meltdown and Left Alternatives.

Leo Panitch is Canada Research Chair in Comparative Political Economy and Distinguished Research Professor of Political Science at York University. Editor of The Socialist Register for 25 years, his many books include Working Class Politics in Crisis, A Different Kind of State, The End of Parliamentary Socialism, and American Empire and The Political Economy of Global Finance.

Duncan Foley is Leo Model Professor of Economics at the New School for Social Research in New York, and an external professor at the Santa Fe Institute. He received the PhD in Economics from Yale University, and has taught at M.I.T., Stanford, and Barnard College of Columbia University. His interests in economics center on economic theory, political economy, the history of economics, mathematical modeling, and the foundations of statistical reasoning. Recent research includes work on modeling mammalian brain clock, the economics of global warming, economics and thermodynamics, Marxian value theory, social coordination problems, and Bayesian approaches to theory choice.

Maliha Safri is an assistant professor in the economics department at Drew University, and has taught and published on political economy.  She has published articles in Signs, the Economist’s Voice, Rethinking Marxism, the Middle East Journal, andedited book collections.  She has also been involved with popular education seminars and courses with activists for ten years with the Center For Popular Economics.

David Harvey is the director of the Center for Place, Culture and Politics at the CUNY Graduate Center and the author, most recently, of Rebel Cities (Verso, 2012).

The following evening, join the authors and Doug Henwood for a party and forum at the Brecht Forum.