Skip to primary content
The Ethics of Saving Animals: A Conversation between Elan Abrell and Lori Gruen
25 February 2022, 12:00PM EST

Elan Abrell, author of Animal Sanctuaries: Multispecies Ecologies of Rescue and Care, will be joined by author and professor, Lori Gruen, director of Animal Studies at Wesleyan University, to discuss the meaning of care and the many ethical dilemmas faced by caregivers in captive animal sanctuaries. 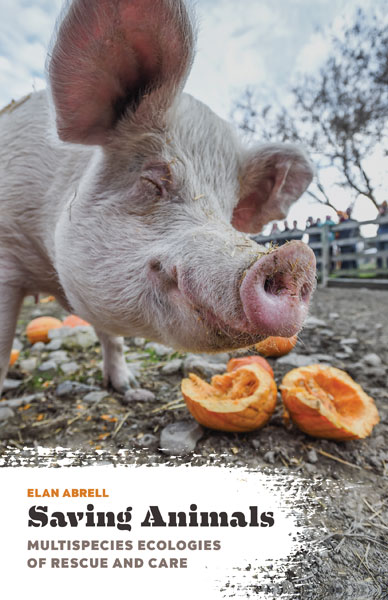 Bridging anthropology with animal studies and political philosophy, and based on fieldwork at animal rescue facilities across the United States, Saving Animals is the first major ethnography to focus on the ethical issues animating the establishment of such spaces. Saving Animals asks what “saving,” “caring for,” and “sanctuary” actually mean by exploring the ethical decision making around sanctuary efforts to unmake property-based human–animal relations by creating spaces in which humans interact with animals as autonomous subjects. Saving Animals illustrates how caregivers and animals cocreate new human–animal ecologies adapted to the material and social conditions of the Anthropocene.

Lori Gruen is the William Griffin Professor of Philosophy at Wesleyan University where she also coordinates Wesleyan Animal Studies. Her work lies at the intersection of ethical theory and practice, with a particular focus on issues that impact those often overlooked in traditional ethical investigations, e.g. women, people of color, non-human animals, incarcerated people. She has published extensively on topics in animal ethics and ecofeminist philosophy. She is the author and editor of 15 books, including Ethics and Animals: An Introduction (Cambridge, 2021, second edition), Entangled Empathy (Lantern Books, 2015), and Critical Terms for Animal Studies (Chicago, 2018). Her current work includes unpacking carceral logics by exploring the ethics of abolition. She has a co-edited volume called Carceral Logics with Justin Marceau (Cambridge, 2022) and a co-authored monograph called Animal Crisis  with Alice Crary  (Polity, 2022).