The CPCP presents its annual conference 2021: The Agrarian Question Today – a conversation with Ruth Wilson Gilmore and Maria Luisa Mendonça 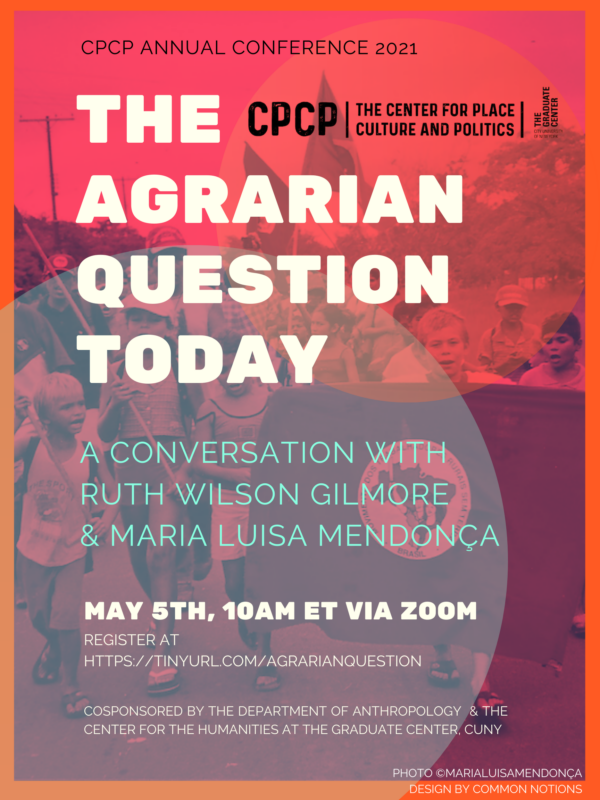 The Center for Place, Culture, and Politics has been exploring in historical and contemporary contexts The Agrarian Question Today. What is going on with food systems, land use, struggles over natural resources, displacement, and climate change? How are the dynamics of racial capitalism in various forms — finance, cartel, extractive — shaping and reshaping people’s relationship to both land and sea? To earth, air, fire, and water? How are rural social movements and indigenous peoples defending forests, biodiversity, and ecological food production? How do do these struggles give insights into broader possibilities for building international organizing, environmental justice, and solidarity?

Please join Ruth Wilson Gilmore and Maria Luisa Mendonça, who will discuss several aspects of these pressing questions. The conversation will focus on the agrarian question in global perspective, focusing on new dynamics of resisting corporations that target farmland as a financial asset. They will explore the research that Dr. Mendonça and her colleagues in social movements have carried out since 2012 exposing how TIAA-CREF participates in land-grabbing, dispossession, and environmental destruction. Since  2017 Mendonça has been a fellow at CPCP, where Gilmore is the director.

Ruth Wilson Gilmore is Director of the Center for Place, Culture, and  Politics, and teaches in Earth and Environmental Sciences, American Studies, and Environmental Psychology at the Graduate Center. Author of the award-winning Golden Gulag: Prisons, Surplus, Crisis, and Opposition in Globalizing California (UC Press), her forthcoming books include Change Everything (Haymarket); Abolition Geography: Essays Toward Liberation (Verso); and (co-edited with Paul Gilroy) Stuart Hall: Selected Writings on Race and Difference (Duke). The documentary Racial Capitalism with Ruth Wilson Gilmore features her internationalist political work. She has co-founded many grassroots organizations including California Prison Moratorium Project, Critical Resistance, and the Central California Environmental Justice Network. Gilmore has lectured in Africa, Asia, Europe, and North America. Recent honors include co-recipient (with Angela Y. Davis and Mike Davis) of the 2020 Lannan Foundation Cultural Freedom Prize.

Maria Luisa Mendonça holds a PhD in Human Geography from the Department of Philosophy, Literature and Social Sciences at University of São Paulo/Brazil (USP), and is currently a research scholar at the Center for Place, Culture and Politics at the Graduate Center of the City University of New York (CUNY). Her research includes history and political economy of agriculture, food, land and water systems, and geopolitical processes of resistance by rural social movements in Brazil and internationally. Her book Political Economy of Agribusiness (Annablume, Sāo Paulo, 2018) demonstrates the central role of the food system in international relations as a result of a dialectical movement of economic crisis and expansion in connection with critical areas such as trade agreements, financial markets, environmental justice, and transnational activism. Her current research project anticipated a trend in financial capital to “migrate” to farmland markets in the Global South, especially after the subprime crisis in the United States’ real estate market in 2008. This research on financial markets and land speculation includes building an international network of scholars and social movements throughout Latin America, North America and Europe. She has published her work in refereed journal articles, in public educational reports and in journalistic outlets. Her experience includes documentary filmmaking, investigative journalism, and community based research. She has taught international political economy at University of Rio de Janeiro (UERJ) and at the center for advanced research Fundação Getúlio Vargas (FGV), and was a visiting scholar at Cornell University in 2013. Mendonça is a co-founder of the World Social Forum and has served in expert meetings on the Right to Food for UN-Women, the Food and Agriculture Organization (FAO), and the United Nations Human Rights Commission. She is the founder of Rede Social de Justiça e Direitos Humanos (Network for Social Justice and Human Rights – www.social.org.br) in Brazil and the editor of the book “Human Rights in Brazil,” published annually since 2000.

Co-sponsored by the Department of Anthropology and the Center for the Humanities at the Graduate Center. This event is free and open to the public.