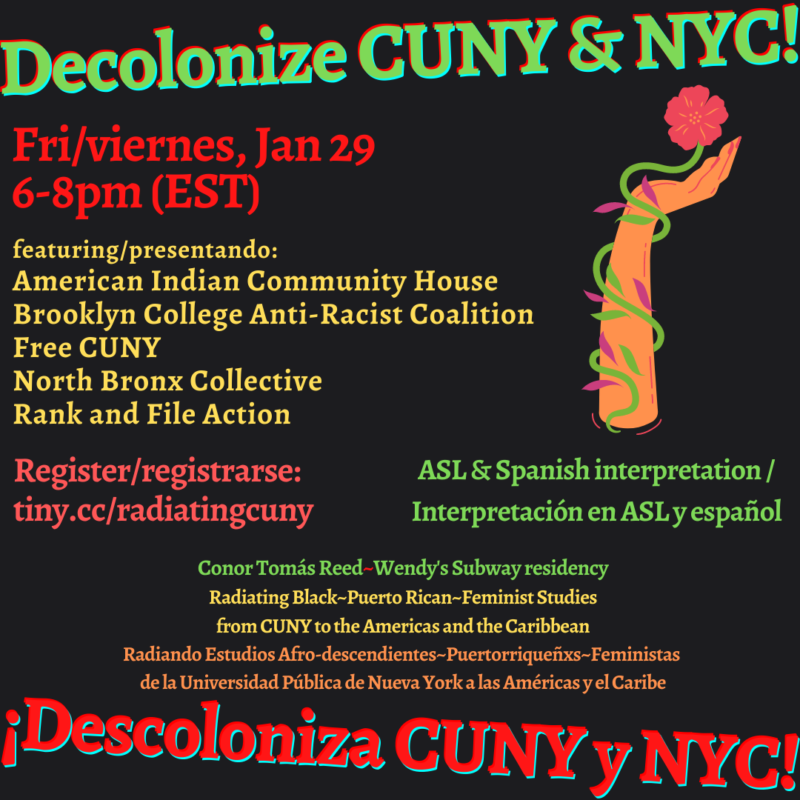 The promise to decolonize CUNY resounds across the city’s twenty-five campuses, with implications that could transform New York City altogether. This panel will feature students, teachers, indigenous protectors, and accomplice community organizers who will share about campaigns to make CUNY tuition-free and improve learning/working conditions, while altering the university and city’s settler-colonial relationship to the area’s ecosystem and peoples.

This online event will take place on Zoom with live captioning in English, and ASL and Spanish interpretation. Livestreaming will also occur on Youtube [youtube.com]. This event is organized as part of Conor Tomás Reed’s residency at Wendy’s Subway, Radiating Black~Puerto Rican~Feminist Studies from the City University of New York to the Americas and the Caribbean [wendyssubway.com].

Brooklyn College Anti-Racist Coalition (ARC) is comprised of students, staff, and faculty who recognize that systemic racism is a primary impediment to institutional change at Brooklyn College. They are adamant that white-supremacy is only recognized through power relations and that its dismantling requires self-determination and control over material resources as the only means of implementing institutional change.

Free CUNY is a student-led CUNY-wide organization working for a free and liberatory university. Their vision of a free CUNY is rooted in the long history of Black and Brown working-class student organizing at CUNY, and incorporates anti-racist and abolitionist principles in their work. Free CUNY advocates for a tuition-free university, as well as for free MetroCards and childcare, zero-cost classes, and many other ways to transform our university.

North Bronx Collective is a group of BIPOC and QBIPOC women artists, educators, community gardeners and long-time local organizers spearheading popular initiatives against policing, gentrification, and food apartheid. They’re committed to community and democratic control of land, institutions, and resources, against the rule of property, the power of the carceral state, and the ongoing legacy of colonialism.

Rank and File Action (RAFA) is a group of militant rank & file activists at CUNY challenging the culture of austerity in higher education and demanding a more democratic fighting union. RAFA stands for participatory, inclusive, democratic unionism and grassroots, militant, working-class organizing for a vibrant and fully funded people’s university that supports the basic needs of students, staff, and faculty and challenges multiple oppressions harming our communities.