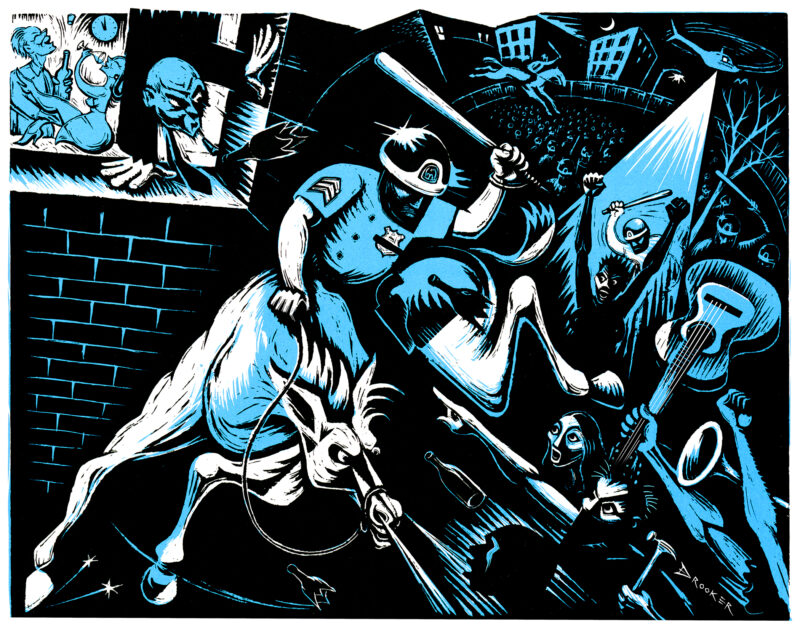 Register in advance for this meeting (if you would like to dial-in, you will receive the number after registration):

What sparks revolutionary change? Ever since the publication of his 1987 classic The Imagination of the New Left, George Katsiaficas has highlighted the role played by “the eros effect,” which reunites people with their humanity while fostering bonds of solidarity. In their 2017 collection Spontaneous Combustion: The Eros Effect and Global Revolution, Jason del Gandio and AK Thompson invited contributors to extend Katsiaficas’ concept through case studies and theoretical investigations.

Spontaneous Combustion also featured a number of critical rejoinders that raised questions about Katsiaficas’ formulation. Among these was AK Thompson’s “Eros Effect or Biological Hatred?,” which foregrounded the role played by the experience of lack in social struggle.

On December 7, the Center for Place, Culture and Politics will host Katsiaficas and Thompson as they make the case for their respective theoretical positions while addressing the fundamental question: what sparks revolutionary change?

The Institute for Anarchist Studies (IAS) and its journal, Perspectives on Anarchist Theory, will host a written response by George Katsiaficas to the Spontaneous Combustion book. It will appear on the IAS website here: https://anarchiststudies.org [anarchiststudies.org]

George Katsiaficas is a longtime activist and an author of books on the global imagination of 1968 and European and Asian autonomous movements. Together with Kathleen Cleaver, he edited Liberation, Imagination, and the Black Panther Party: A New Look at the Panthers and Their Legacy (2001). His two-volume Asia’s Unknown Uprisings (2012, 2013) focuses on South Korean social movements in the twentieth century, and popular occupations of public space in ten places in Asia in the 1980s and 1990s. For many years, George taught at Wentworth Institute of Technology in Boston. He was a research affiliate at Harvard in both Korean studies and European studies and twice awarded Fulbright fellowships (to Germany and Korea). His website is: http://www.eroseffect.com [eroseffect.com].

AK Thompson got kicked out of high school for publishing an underground newspaper called The Agitator and has been an activist and social theorist ever since. Currently a Professor of Social Movements and Social Change at Ithaca College, his publications include Sociology for Changing the World: Social Movements/Social Research (2006), Black Bloc, White Riot: Anti-Globalization and the Genealogy of Dissent (2010), Keywords for Radicals: The Contested Vocabulary of Late-Capitalist Struggle (2016), Spontaneous Combustion: The Eros Effect and Global Revolution (2017), and, most recently, Premonitions: Selected Essays on the Culture of Revolt (2018), Between 2005 and 2012, he served on the Editorial Committee of Upping the Anti: A Journal of Theory and Action.

This event is sponsored by the Center for Place, Culture and Politics.
It is free and open to the public.