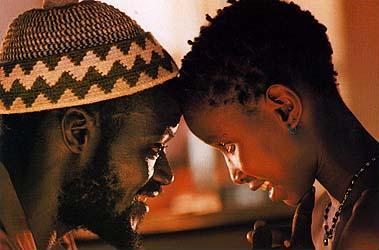 To take advantage of pioneering Bissau-Guinean filmmaker Sana Na N’Hada’s presence in NYC, we will be hosting him for a screening of his first feature film, XIME. This strikingly beautiful work depicts the traditional region of Xime as it at first slowly, and then suddenly, is overcome by the necessity to participate in the anti-colonialist struggle for independence in Guinea-Bissau.

Educated at the Cuban Film Institute (ICAIC), N’Hada returned to Guinea-Bissau in time to co-direct the celebrated short film, THE RETURN OF CABRAL (1976). He wrote the screenplay for Filipa Cesar’s feature SPILL REEL (2017), which cleverly documents the digitization of the fragile revolutionary cinematic archive of Guinea-Bissau, and also collaborated with Chris Marker on SANS SOLEIL.

The semi-autobiographical XIME focuses on two brothers: Raul, a revolutionary on the run, and the younger Bedan, subject to a host of patriarchal/spiritually quietist influences, including his father, a Catholic priest, and the village elders. Alternating between the momentum of a manhunt and the rhythms of everyday existence in a rural village, the film includes a funny and yet haunting initiation rite in which the young men (including Bedan) must don female clothing, in an apparent attempt to ‘tame’ their youthful, sometimes violent spirits. The film’s climax hinges on another transformation: will the villagers renounce their deeply ingrained non-violent traditions in favor of revolutionary militancy?

This screening and Sana Na N’Hada’s appearance have been made possible thanks to the good graces of the Center for Place, Culture and Politics, Graduate Center, CUNY. N’Hada is a featured speaker at the Mobilizations and Migrations Conference (April 12-13) at the Graduate Center and The People’s Forum.

This film event at Anthology Film Archives has an admission fee. The Migrations and Mobilizations conference, on April 12 and 13, is free and open to the public.