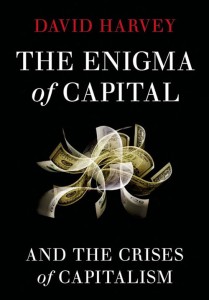 … the debate on post-crisis economics is approaching the fundamental question: the dark, deep, Orc-filled dungeon of economics, namely what is capital and why does it exist?

This was of course the question Karl Marx asked. This year David Harvey, the influential Marxist and renowned geographer, produced a revised and updated edition of The Enigma of Capital (Profile, £8.99). It remains the most complete Marxist attempt to situate the global crisis in the context of the irresolvable tensions of a system based on “self-expanding money”: “The troubles that have beset the world this last 30 years,” Harvey writes, “signal that a limit is looming to continuous capital accumulation that cannot be transcended except by creating fictions that cannot last.”

Congratulations to David Harvey for making this Best-of list, particularly since he was up against a slew of economics-themed books published in the past few years since the extent of the current crisis of capitalism first started to become apparent.